Singapura: the Malay name for “Lion City”.
The city-state in Southeast Asia consists of the island of Singapore and about 54 smaller islands. The main island is linked by two causeways to Johor Bahru on the southern tip of the Malay Peninsula.

The former British colonial trading post is since its independency in 1965, officially the Republic of Singapore, the city state is situated 137 km (85 mi) north of the equator, and just south of Peninsular Malaysia. In the south, the Strait of Singapore separates the island from the Riau Archipelago of Indonesia.

Singapore occupies an area of 718 km², compared, it is the smallest state in Southeast Asia, slightly larger then one fourth of Luxembourg or also slightly larger than 3.5 times the size of the District of Columbia, Washington, DC.

The city state has a population of 5.6 million people, and a resident population of 3.9 million (in 2016). Official languages are English (language of administration), Malay, Mandarin, and Tamil.

Singapore is famous for being a global financial centre, a shopping paradise, and as a spot for a variety of activities, dining and entertainment. 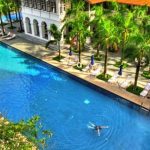